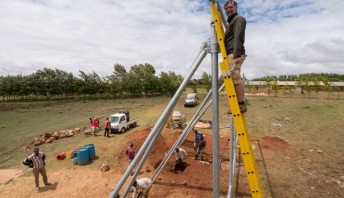 We are happy to announce an innovative approach to fog collecting. As we have been installing fog collectors in Tanzania since 2011 we were curious when our appreciated project parter – MunichRe – approached us early in 2016 to talk about a further developed technology.

The new collector CloudFisher® was tested in Morocco and will now provide 800 schoolchildren with drinking water at our project place Quameyu in Tanzania.

Since 2011, p(e)d world has built two large cisterns and thirteen double collectors with a net surface area of 80 m² each – some with the financial support of Munich Re Foundation. The water is supplied to school children in several schools and two villages. Eight hundred girls and boys attending the Qameyu Secondary School reap the benefits. Traditional well construction is not possible in this area as the settlements are located on a highland plateau. Children – most of them girls – must walk several hours every day to fetch water, usually of inferior quality.

Bernhard Küppers, managing director at p(e)d world, is very happy with his organisation’s fog net projects in Tanzania. Many of the collectors have been supplying clean drinking water for years now. Of course, nets and collecting troughs tear or break after a few years and have to be replaced. Vivian Ernest, the project manager on site, has been taking care of all the maintenance work so far. As a result, the fog water has been able to flow continuously, even though the sensitive nets of the earlier technology have suffered repeated damage.

CloudFisher® replaces old net
Now an old collector needs to be completely replaced at the main location of Qameyu: some of the steel cables and nets are torn, and the collecting troughs are rusty after long years of use. With the financial support of Munich Re Foundation, a new generation collector, the CloudFisher®, will be set up in Qameyu in the spring of 2017.

The students at the secondary school will benefit significantly from this, as the CloudFisher® produces much higher water yields than the old nets, and needs hardly any maintenance. For the Munich based  developer, Peter Trautwein, this is a good opportunity to test his new collector close to the equator at an altitude of 2,500 m, in real practice and under very different conditions than in Morocco.

Prior to this, the new CloudFisher® had been repeatedly improved and tested during a three-year development and test phase in the Anti-Atlas Mountains of Morocco, where it will be installed across a wide area when the development of a major project begins in January 2017. The installation of the collector in Tanzania means that the new technology is now being used for the first time in another region. A win-win situation for everyone involved: innovation and technology transfer are working in practice, and the local people have more clean drinking water.